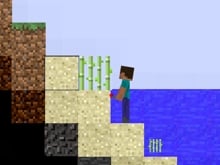 Explore this pixel world just like in Minecraft but this time in 2D. Mina various blocks, create and build anything you want. Share your world with friends, family or anyone you like. It is just up to you what you build. Will it be something special nobody has ever seen before?


There are no gameplays yet.
Add the first one!
How to add gameplay!

Published: Mar 15th, 2018 HTML5 Play another installment into the Mine Clone series, where you’ll be able to build up the world around you.

Published: Dec 15th, 2015 HTML5 This is a game for several players who themselves take care of everything happening. If you have ever played the PC game Terraria, you will surely like this game.

Published: Aug 2nd, 2014 HTML5 Put yourself in a cubic world. This time in the style of Minecraft!

Published: Apr 20th, 2013 HTML5 This is a Minecraft clone and you will be able to change the country as you like.

Published: Feb 10th, 2020 HTML5 Build up or destroy blocks around you in this Minecraft themed game.

Published: Nov 22nd, 2019 HTML5 Build many different structures in this game and destroy them right afterwards.

Published: Sep 12th, 2019 HTML5 Build up the world and try to survive in this multiplayer game.

Published: Jul 1st, 2019 HTML5 Build anything your heart desires in a world made out of cubes.

Published: May 28th, 2019 HTML5 Build your surroundings in the Minecraft style in the world of Kogama.

Published: May 8th, 2019 HTML5 Play the first version of Minecraft in your browser.

Published: Jan 27th, 2019 HTML5 Build up with bricks in the Kogama world around you.

Published: Nov 1st, 2018 HTML5 This simulator game will allow you to build structures similarly to Fortnite.

Published: Jun 2nd, 2016 Flash In this online game you must survive. That's the only thing that matters.

how to go in creative mode while playing a game

it is gliched when i open the chest it gets gliched

This game is awesome!

It's pretty much just regular Minecraft, it's just 2D.

1. When you are playing in survival mode, when you die, you lose a lot of your valuables. For example, I was playing in a survival round and I promised myself I would NOT go into creative mode. I found a cliff and I decided to live there. A creeper came by and blew me off the cliff. Pretty far too. I died. I had all diamond armor (which is the best armor in the game, except for the golden crown, which you find in the dungeons), a diamond sword, two crowns, diamond blocks, stone, wood, and sand. When I got back to my death spot, everything was gone except half the stone and the sand.

2. Now, this one isn't really a problem, it's just a little annoying. I can't craft as many things as I would like to. For example, I wanted to make a farm, but I needed hoppers. Pretty simple, right? I mean, it's just hoppers. So I went to my crafting table and I made the recipe. When I put the iron and the chest in, there was no hopper, nothing. This might be due to the fact that this game was made almost seven years ago, and hoppers had not been in the game yet. But here are just some of the items that are not available in this game (as of 1.8)

I'm going to stop here because I'm getting tired of typing lol.
But this game is missing probably around 90% of the blocks in regular Minecraft (Which is probably 300ish)

If these were not a problem, I would most definitely rate this game a 10/10⭐.
I've been able to make houses and farms and fight.

If you guys could make an update to this game that would be great!

I also forgot to say that there are only 12 mobs in this game out of the 85 mobs (I think) that I found as of v1.16.1 JavaEdition
These mobs are:

This is just a heads up for the new people who haven't played this game before.

Their eyes vary from red to yellow and are usually dull and glazed. Described as "hideously ugly", they have a broad nose that sits on a flat face with pointed ears and a wide mouth. Their mouth contains small, but sharp fangs. Their skin pigment ranges from a deep red through nearly any shade of orange to yellow.

You are a noob

MINECRAFT is a game ANGPRO

Published: Aug 7th, 2020 HTML5 Help the older lover save his chosen one from the dangerous garden.

Published: Aug 6th, 2020 HTML5 Action game where you try to kill as many players on the server.

Published: Aug 6th, 2020 HTML5 A racing game in which you have to get to the first place as quickly as possible.

Published: Aug 4th, 2020 HTML5 Play as a repairman and repair some broken phones.

Published: Aug 27th, 2011 HTML5 Great strategy game that will entertain you for a long time.

Published: Dec 14th, 2015 HTML5 Have you ever wandered what Minecraft would be like in 2D? Today you can find out!