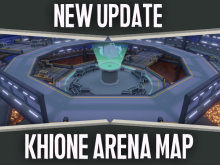 Games in the video:

- Added Khione Arena map! Designed for fast action, spherical arena offers quick interaction between players. Battle it out to claim a spot among the best Khionian warriors. Gaining intel in the center of the map will help you. It replaces the old Planet Khione map.
- Added Daily Quests! Once per day the player gets a random quest. Finish it to claim a reward. Player can have up to three quests in progress. Once per day a quest can be reset to get a different one. There are ten unique quests.

Published: Aug 6th, 2017 Try to do some stunts in multiplayer game Madalin Stunt Cars 2. Choose the car a...

Published: Jun 28th, 2017 New video from remastered Crash Bandicoot 2 Hang Eight. We can not wait for this...

How to build a nest in Fly like a bird 3

Published: Aug 8th, 2017 Just a easy way to collect twigs... not going through string in the trash.

Published: Jul 22nd, 2017 Check out our latest gameplay video from game Krew.io Did you ever have a chance...

Published: Feb 3rd, 2018 Check gameplay of our popular online game Combat Reloaded. You have to everythin...

Published: Apr 19th, 2018 "All Games in One". In multiplayer game Cartoon Strike, each map is inspired by...

Published: Mar 16th, 2019 Here is our gameplay of action shooter Shell Shockers. Play as eggs that are tr...

Published: Oct 31st, 2018 Hello guys, we still need to change a few things after our internal tests, but o...

Published: Aug 6th, 2017 A four year old crow trying to learn his way through life, trying to find a frie...

Published: Jul 31st, 2017 The lonely life of one crow, who is trying to look for friends. Crows are known...

Published: Mar 16th, 2019 Here is the gameplay from Battle Royale game. The game begins on a plane from wh...

[Remove]
There is no comment for this video, be first!

Published: Feb 25th, 2021 HTML5 Go downhill on a snowboard and do various tricks.

Published: Feb 24th, 2021 HTML5 Tavern Master is all about managing your medieval tavern.

Published: Feb 13th, 2021 HTML5 Play a bomberman in the arena and eliminate all enemies.

Published: Dec 14th, 2015 HTML5 Have you ever wandered what Minecraft would be like in 2D? Today you can find out!

Published: Jan 21st, 2021 HTML5 Find the impostor and save the spaceship and its crew.

Published: Aug 27th, 2011 HTML5 Great strategy game that will entertain you for a long time.